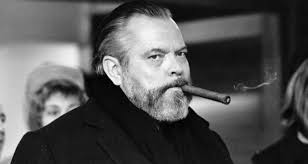 Orson Welles directed and starred in two late-’40s noirs. He is the hapless hero in one; in the other, the dastardly villain. In The Lady from Shanghai (1947), Welles cast himself as itinerant Irish sailor Michael O’Hara, who narrates the film and is the fall guy in an intricate homicidal plot. In The Stranger (1946), Welles plays an unrepentant Nazi. In both, the acting up and down the cast is superb, and the direction a marvel.

The Stranger has the more straightforward plot and is the more righteous of the two. It includes newsreel footage informing an incredulous public of the atrocities committed by Nazi Germany. It is also the only movie Welles made that showed a profit when it was first released. Variety called it “socko melodrama.”

Franz Kindler (Welles), a bigwig in the Third Reich, who is said to have “conceived the theory of genocide,” has reinvented himself as Charles Rankin, an instructor at the exclusive Harper School for Boys (“established 1827”) in an idyllic Connecticut village. An imprisoned Nazi fanatic, Konrad Meinike (Konstantin Shayne), is released in the hope that he will lead the authorities—in the person of pipe-smoking Mr. Wilson, agent of the war crimes commission (Edward G. Robinson)—to Kindler.

For more of this piece, please link here. And click here for previous essays on classic movies.

BotRandom Poem, Random PoetryMay 31, 2020
By MR My mom’s once told me, “Son drop the gun and pick up a pen…” And let your words become a weapon that’ll demonstrate positivity amongst both women and men… So I began to express my pain and disregard …
END_OF_DOCUMENT_TOKEN_TO_BE_REPLACED

BotRandom Poem, Random PoetryJune 19, 2020
Poet, novelist, editor, and lawyer Michael Friedman died of cancer on May 5 in Denver.  In the literary world Michael was best known as the editor and publisher of Shiny, which Ron Silliman in 2005 called “as good looking a …
END_OF_DOCUMENT_TOKEN_TO_BE_REPLACED

Poem with a Verse

BotRandom Poem, Random PoetryNovember 3, 2020
By AC Let me take you to a place I like to go, when I’m looking for some answers to the many, many questions about things that I don’t know. There is no car that could take you on this …
END_OF_DOCUMENT_TOKEN_TO_BE_REPLACED

BotRandom Poem, Random PoetryApril 22, 2020
“But Lord! What a sad time it is to see no boats upon the River; and grass grows all up and down White Hall court, and nobody but poor wretches in the streets!”  — Samuel Pepys (I) Here in Australia, …
END_OF_DOCUMENT_TOKEN_TO_BE_REPLACED