On Translating Baudelaire’s Prose Poems for “The Paris Review” 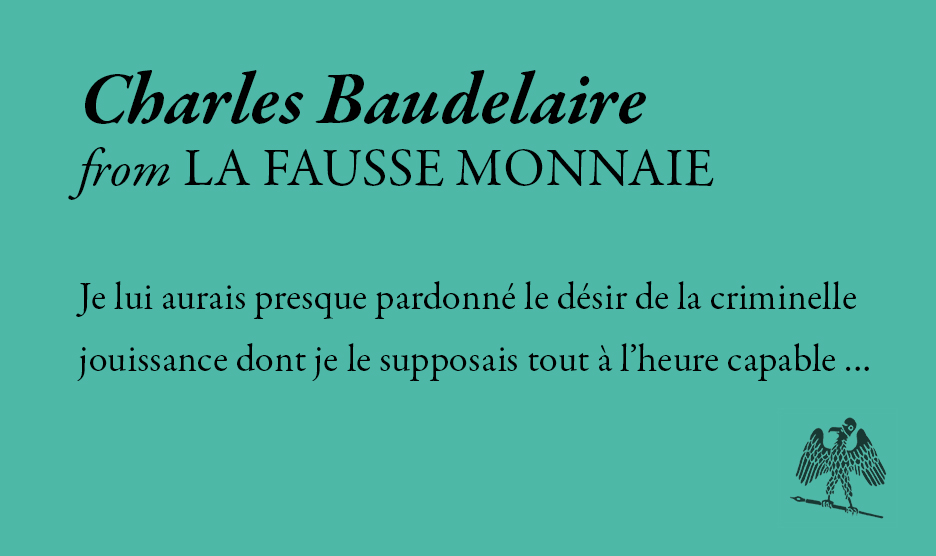 In Baudelaire’s “La fausse monnaie,” which I have rendered as “Fake Money,” the poet is outraged when his companion gives a counterfeit coin to a beggar. Translating the poem, I aimed for a coherent and well-written narrative rather than a literal version.

The phrase la criminelle jouissance in the last paragraph is difficult to translate because we have no English equivalent of jouissance. The standard definition, enjoyment, leaves out the secondary sense of the word, sexual climax. Critical theorists have made much of jouissance and connected the term itself with a transgressive impulse.

All along, I was undecided between this formulation and one that put a greater value on narrative speed. In the end, I decided on the latter: “I might almost have acquitted him of the criminality I have charged him with.” In tonality and succinctness, this is superior, though the gain in clarity sacrifices the concept of “joyous criminality” or perhaps “transgressive joy” that Baudelaire champions in a number of his prose poems (gathered under the title Spleen de Paris). Were I to publish a group of my translations, it would be with notes and an introduction addressing just such an issue as this.

I keep making changes in my translations, even after they have been published, as it is the bane of the translator’s life to keep discovering ways he or she can improve upon what he or she has done. The work is endless. But if we can communicate something of the flavor of a great writer, even at the cost of a significant nuance, the gain is great. —David Lehman, translator of Charles Baudelaire’s “Fake Money” and “Get Drunk”

BotRandom Poem, Random PoetryDecember 2, 2020
By RA We are faced with new times. Our homes have become workplaces and schools. I know some days it may get the best of you but try to understand and believe you can overcome anything you’re faced with because …
END_OF_DOCUMENT_TOKEN_TO_BE_REPLACED

The trouble with dreams

BotRandom Poem, Random PoetryApril 9, 2020
I had a dream one night that I had taken a fall Spinning as I plummeted Out of control I fell from a mountain From way up so highFrom then on my friendsI was sure I would die. As I …
END_OF_DOCUMENT_TOKEN_TO_BE_REPLACED

BotRandom Poem, Random PoetrySeptember 21, 2020
I don’t think people know how to thinkThey look at others to confirm realitywho look at others and it goes on and onWe have inherited tribalismwhich rests in our mindwaiting for moments of disquietand the admittance of short term thinkingwhere …
END_OF_DOCUMENT_TOKEN_TO_BE_REPLACED