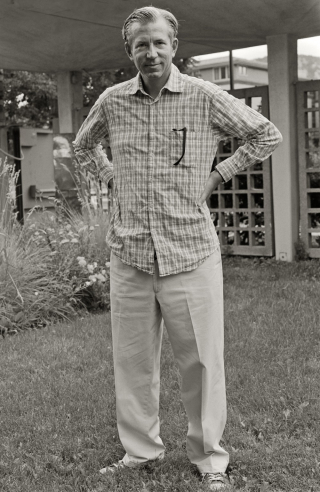 Poet, novelist, editor, and lawyer Michael Friedman died of cancer on May 5 in Denver.  In the literary world Michael was best known as the editor and publisher of Shiny, which Ron Silliman in 2005 called “as good looking a poetry periodical as we now have,” and which featured the work of leading avant-garde poets from John Ashbery and John Wieners to Bernadette Mayer and Rae Armantrout alongside many emerging writers.

Michael’s own writing, in verse and prose, was marked by joyful hedonism, deep whimsy, and a passion for pop culture.  His poetry appeared in several chapbooks and two full-length collections, Special Capacity (1992) and Species (2000), the latter made up of prose poems that riff on tropes and clichés from fiction (“Menelaus had been feeling edgy lately”) and hardboiled movie dialogue (“Listen, I was once a frog prince, it wasn’t pretty”).  For the last 15 years Michael produced a series of sparkling comic novellas, three of which were collected in a 2016 omnibus, Martian Dawn and Other Novels, that garnered praise from the likes of Ashbery, Harry Mathews, Wayne Koestenbaum, and Molly Young, who supplied a rapturous introduction (“he leaves me feeling invested in my own freakishness”).

Michael is survived by his wife Dianne Perry, two sons, Joe and Henry Perry-Friedman, and his parents, Lester Friedman and Sally Long.  He was the nephew of painter and New York School collaborator Jane Freilicher.  For twenty-five years Michael worked for a Denver law firm, specializing in real estate “with a focus on affordable public housing,” as David Schwarz noted in an obituary for the Poetry Project.

I met Michael when we were grad students at Yale in 1982 and was instantly taken with his mischievous sense of humor, his love of James Bond and other retro icons, and his beguiling mix of urbanity and self-deprecation.  Michael memorialized our friendship in a poem, one of a series named after people to whom he was close:

Today I got a letter from my long-lost graduate school friend Roger Gilbert.  He was glad to hear (through Patti Boyer) that I hadn’t changed, and suggested that we revisit some of our old haunts in New Haven this summer (“CCH, Machine City, the Gypsy, etc.”) and “weep unashamedly” as the nostalgia overwhelms us!  The image of Roger weeping at our reunion hit home with me, as I’d always thought that, with his thin, unathletic frame and glasses, he bore a striking resemblance to Poindexter.  Or Ron Padgett.  Later I pictured Roger sobbing over my grave on a grey fall afternoon.  Then the two of us standing somberly at Ron Padgett’s grave.

I took a long walk with Roger in the summer of 1984 up Whitney Avenue to his house.  His dissertation was on “walking poems,” including Apollinaire’s “Zone.”  I suggested Padgett’s “Strawberries in Mexico” as another good example of the genre.  It was a sunny day, Roger wore a red sweater over a light blue shirt.

I long ago forgave Michael for the reference to Poindexter, a nerdy character from Felix the Cat cartoons, which he offset with the much more flattering comparison to the poet Ron Padgett.  Though Padgett is still with us, the poem turned out to be sadly prescient.  I haven’t visited Michael’s grave yet, but if and when I do I expect to shed a tear.  But I’ll also smile at the memory of his generous, impish, scintillating spirit.

BotRandom Poem, Random PoetryJune 19, 2020
By SU My vision was obscured from the blood in my eyes. So, I used that to write my notes down in red, I transcribed… Yet I’m alive, heart almost numb, seeking an escape route from this oppression and feelings …
END_OF_DOCUMENT_TOKEN_TO_BE_REPLACED

BotRandom Poem, Random PoetryAugust 21, 2020
By BH Looking through caged windows So many faces, so much pain Immigrants being treated less than animals Hunted down and casted away Homeless, displaced with nowhere to escape God’s children Traveling from place to place It’s hard to call …
END_OF_DOCUMENT_TOKEN_TO_BE_REPLACED

BotRandom Poem, Random PoetryApril 17, 2020
It’s hard to turn realisations into habits Even harder to let go of the old ones when they’re as familiar to you as insomnia is to the night The sound of people sleeping or the lack of it is somewhat …
END_OF_DOCUMENT_TOKEN_TO_BE_REPLACED

BotRandom Poem, Random PoetrySeptember 2, 2020
i create rain just so you can look out just so it can help you to finally look inward and find me there waiting for you The post [341] Rainy Days appeared first on Smoke Words Every Day.
END_OF_DOCUMENT_TOKEN_TO_BE_REPLACED