Adrienne Su recommends “Poems in the Manner Of…” 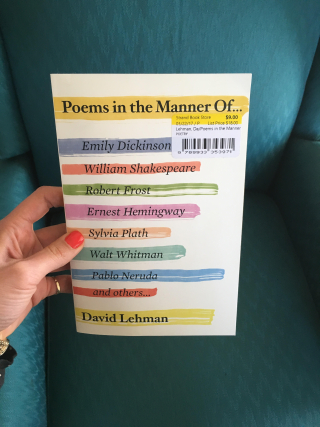 2020 has not brought a windfall of reading time for me, never mind writing time. I read plenty, but it’s mostly news: I can’t stop checking to see which part of what sky is falling. My summer reading was pedagogy: how to move in-person teaching to Zoom and still do it reasonably well. These forms of reading have been essential, but neither feeds the spirit. Absorption in works designed to outlive their moment, the kind of reading I did when print was the only medium and newspapers weren’t refreshed by the minute, is one of the few sources of comfort, even hope, I’ve been able to access in this extra-horrible annus horribilis. But with the ongoing sense of daily emergency, I have to be led there, the way an exhausted, wailing child has to be persuaded to let go and sleep.

Once I get there, I wonder how I did without. David Lehman’s Poems in the Manner Of… takes me back to that youthful state of stumbling upon Kafka or Rilke or Lady Murasaki for the first time and hearing a singular voice beam across centuries, languages, oceans. The collection is an autobiography in reading, an extended love letter to literature, and a series of tributes by ostensible imitation, with translations in the mix. But these poems aren’t imitations; they are Lehman poems that not only embrace their influences, they take up residence in them and seize their own voice by harnessing another. Its elasticity is a kind of miracle. At moments I forget that I’m reading a “poem in the manner of” rather than the poet whose manner is being borrowed.

The poems can be hilarious (“Poem in the Manner of Bashō,” “Poem in the Manner of Wallace Stevens as Rewritten by Gertrude Stein”); they can also be poignant reminders that time moves in only one direction (“I Remember,” after Joe Brainard). The miracle is that what unfolds from the collection is double: brief introductions (and sometimes the poems themselves) bring you into Lehman’s life, with poets and writers as the soundtrack to each era, and while you join him on his journey, a parallel track in your head opens up your own story. You don’t have to be as voluminously well-read as Lehman to connect; the poems open the door to learning as well as memory, and they’re an affirmation—in a time when many writers can’t write—that reading can be a form of writing.

BotRandom Poem, Random PoetryNovember 3, 2020
The familiarity of the unfamiliar passes in my mind like a muffled sound It puts me to sleep so I don’t let it overwhelm me with pain I try to understand, analyse, hear, see it but its foreign language evades …
END_OF_DOCUMENT_TOKEN_TO_BE_REPLACED

BotRandom Poem, Random PoetryDecember 13, 2020
By AL Yesterday, fear was my greatest enemy Yet, today it’s a companion of mine And since no man can foretell the future Tomorrow we’ll see what we shall find The post Fear appeared first on Free Minds Book Club …
END_OF_DOCUMENT_TOKEN_TO_BE_REPLACED

BotRandom Poem, Random PoetryJune 23, 2020
Answers galore but ⁣ none that fit my cadence⁣ Fragmentary focus of blinking eyes⁣ I wake up a thousand times each night⁣ I wish I was alive each time ⁣ Forgetful dreams full of insights⁣ while traumatic nightmares fill my⁣ …
END_OF_DOCUMENT_TOKEN_TO_BE_REPLACED

[385] When You Forget Listening